The Code of Manavas by Arpit Bakshi | Book Review

Book one of the Maha Vishnu Trilogy, The Code of Manavas, is set some two million years past ad 2050, when earth as we know it ceased to exist and so did mankind. A new race, the Manavas, now exists on Bhoomi, the erstwhile Earth, which is divided into two cities—Madhavpur and Ayudhpur. In the quiet and peaceful city of Madhavpur, a reclusive Krishna is busy with an immense task. He has to prepare a new abode for the Manavas before an impending apocalypse destroys them. He knows something that nobody else does—the Manavas are running out of time faster than they can imagine and there are no inhabitable planets to escape to. 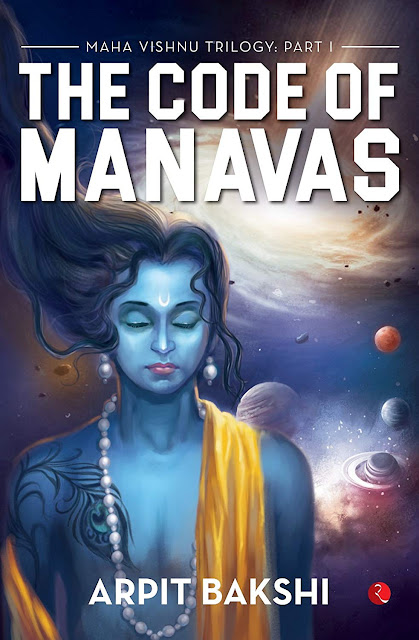 To make matters worse, there is someone in Madhavpur who wants to destroy Krishna and subjugate each Manava. The Manavas, it seems, are doomed. Yet Krishna knows there is a slim chance of survival for the Manavas, although there is a huge price to be paid for it. Will the various factions of the Manavas unite for the greater good? Will Krishna, who saved them during the turn of the last Yuga, be able to save them now? What will be the price to pay? Enter the mythical world of Maha Vishnu and get swept up in a fast-paced suspenseful narrative.

The code of manavas is a story based in future, almost 2 million years past 2050 when Earth is Bhumi and humans are Manavas. Manavas, the immortals are more intelligent and more balanced version of today’s mankind. The story is from the cities of Madhavpur and Ayudhpur. This book is a blend of mythology and science fiction.

The cover of the book is very attractive and the title is also apt. The book is an intriguing read with a unique plot and an appealing storyline. The language and pace are very understandable, simple and easy to follow. The scientific terms used are also defined well by the author. The plot twists and turns are well set.

I really enjoyed reading book though I am not a big fan of mythology. The book has ended in a cliffhanger note and I can't wait to read the next in a series. I would recommend the book to the mythology and science fiction lovers.
Email Post
Labels: Arpit Bakshi book review mythology science fiction The Code of Manavas