The Conquest of the East: Royal Crown Returns by R. Durgadoss | Book Review

The numerous attempts made by the Cholas to capture the prestigious royal crown, the mythical aaram (necklace) and the precious garland of pearls from the Pandyas have failed. Emperor Raja Raja Chola’s grandfather even defeated the Pandyas, but their king managed to escape with the royal jewels and kept these in safe custody with a Lankan king.

Years later, even after Raja Raja Chola’s victory against the Lankan king, the jewels eluded the Cholas as the Lankan king too fled with the jewels. Emperor Rajendra Chola takes it upon himself to finish his dynasty’s incomplete agenda. The jewel trail extends well beyond the shores of Bharat, right up to the kingdom of Srivijaya (modern-day Indonesia). Rajendra Chola’s naval commander Surya emerges as the greatest support to his king. Will Surya be able to restore the Chola pride?
Even with his unbreakable spirit, courage and special powers, Surya must be careful as the enemies may have lost wars but they are hitting back through proxy wars launched by hired mercenaries. He must use every trick in the book to unmask the enemy and save the Chola kingdom from plunging into a civil war.

The Conquest of the East: Royal Crown Returns is an action-packed page-turner that is a befitting sequel to the bestselling book The Indus Challenge. 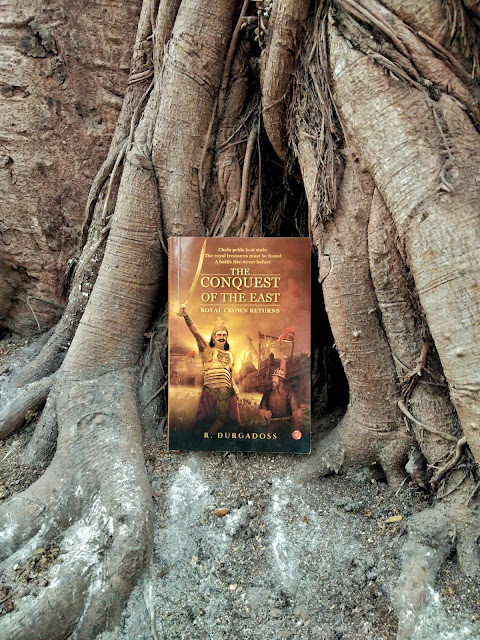 The story begins with the introduction of Surya in 1000 A.D. He's a common boy from the Chola dynasty.

The title is unique & fascinating, it ignites the spirit in the readers with a shaft of curiosity as to what happens in the book. The plot is interesting which includes elements of history with mythology along with a blend of twists and turns woven beautifully in the story. The story is medium paced, use of appropriate illustrations make the read worthy and easy to understand.

The language of the book is simple and effective. The book has been divided into small chapters which makes it a quick read. The narration of the book could've been improved. The author must have done extensive research to write this book and the same reflects in the book. The book is third in the series of The Indus Challenge but it can be read independently. A must read for all historical and mythological lovers.
Email Post
Labels: book review fiction historical fiction history Indian author mythology R. Durgadoss Royal Crown Returns rupa publications The Conquest of the East