Oxygen manifesto is a story of the triumph of ordinary people over the might of the establishment in their battle to save the environment. Thatha lives in a remote and inaccessible part of Manipur and Ravi is a young IAS Officer from the Tamil Nadu Cadre. Circumstances bring them together and they create the most effective environmental movement the world has ever seen. They shun the politics of criticism and personal attacks and focus on establishing a new Polity based on the principles of environmental protection, habitat conservation, direct Civil action and democratic Decentralization. 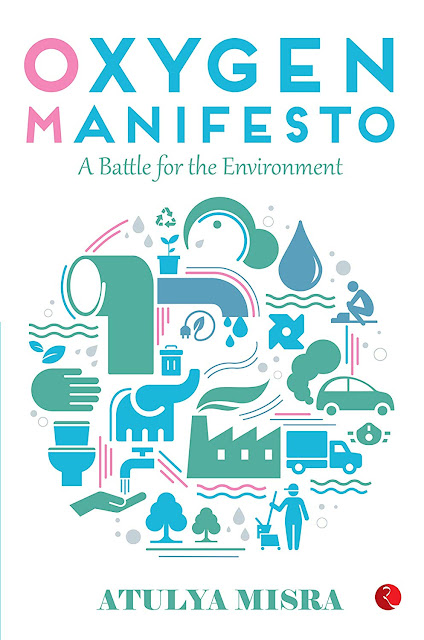 Oxygen manifesto is an engaging story about environmental degradation and the impact of the Anthropocene. It exposes the myth around wealth creation and the paradigm of economic growth. It also plants a development narrative that is environment-centric—an idea which is considered fringe in today’s times, but is bound to emerge as a mainstream thought in the future.

The story also has an undercurrent of minimalism and Veganism, as opposed to consumerism and wasteful consumption. A novel concept of taxing Goods and Services based on their carbon and Water footprint has also been introduced by the writer. This is a must-read for anyone who cares about the future of human civilization.

The protagonist here are Ravi, an IAS officer and Tatha, a Manipur resident. He started a movement named "oxygen manifesto" to save earth.

The cover of the book is very eye catching and the title is also apt. The author's writing style is also very subtle and engaging. The book talks about various subject like politics, environment, technology and religion.

This book gives us the knowledge to make the right choices. It's that kind of book. I realised as I read, one of the most important steps towards change is that we are all fully informed. It's a brilliant book, it makes such good sense. I don't think a review is enough to describe how much this book affected me, it would take pages. A must read for those of us who care about our country, society, planet and most importantly future of our children.
Email Post
Labels: book review climate change environment environmental degradtion global warming human civilisation Oxygen manifesto