This extraordinary, magical novel is the story of Clare and Henry who have known each other since Clare was six and Henry was thirty-six, and were married when Clare was twenty-two and Henry thirty. Impossible but true, because Henry is one of the first people diagnosed with Chrono-Displacement Disorder: periodically his genetic clock resets and he finds himself pulled suddenly into his past or future. His disappearances are spontaneous and his experiences are alternately harrowing and amusing. The Time Traveler's Wife depicts the effects of time travel on Henry and Clare's passionate love for each other with grace and humour. Their struggle to lead normal lives in the face of a force they can neither prevent nor control is intensely moving and entirely unforgettable. 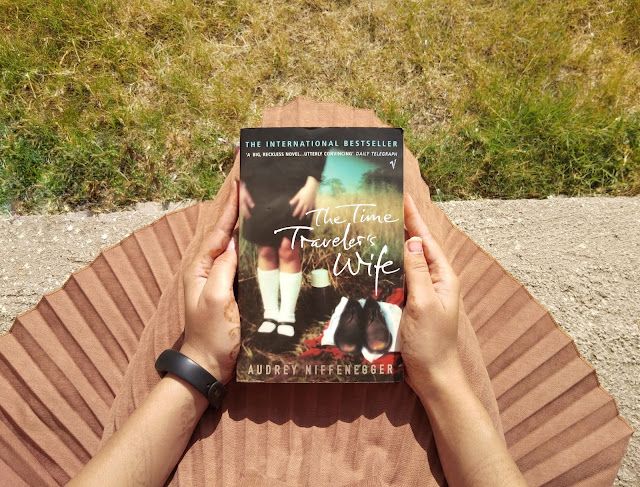 This is a story about two people (Henry and Claire) and the challenges of their relationship. The author writes from both the view points of Clare and Henry which I like because the reader can see both sides of the story.

Henry DeTamble, the main character, is suffering from a genetic defect that causes him to disappear into the past, or future, when he suffers from stress. He has no control over where he will go.

The descriptions of situations the husband finds himself in are so well written that feel you are there with him. The story is gripping, compelling, heart-rending. It's a romance without being cheesy. It's real feelings; really powerful feelings. This unique perspective on time travel really captured my imagination.

I picked up the book because I was interested in the sci-fi aspects, but I couldn't put it down because of my emotional connection to the characters and their story.  I was so involved with the story and characters, that I thought about them when I was away from the book.

The characters are fully fleshed and draw the reader in to the fascinating story. The narration of the book also alternates between Henry and Clare's points of view, giving us deep insight into both of these remarkable characters. This book is funny, sad, and tragic in different degrees.
Email Post