It was the 1950s, a time of gray uniformity and the company man. Young women were supposed to get married, take care of the cleaning and cooking, and raise children. But Lottie Zimmerman wanted more. The awkward tomboy had dreamed of becoming a force in Roller Derby, an increasingly popular televised sport where hair-pulling, raucous brawls, and chaotic spills often took center stage over lightning-fast runs and breath-taking maneuvers around a sharply banked track.

Together with her gal pals, Elsie and Rebecca, enter a rarified world of big-time legends, battles in motion, and competitive grudges, overcoming obstacles that had left many women of the era feeling envious and frustrated.
As they worked their way up through the professional ranks, they rode the roller-coaster of impact and mayhem – both on and off the track. Eventually, they learned what it took to reach the highest, and were soon reveling in the cheers of countless fans.

And yet, while the action on wheels attracted audiences in the millions, much of this post-war adventure remained hidden from view. Part high-speed action, bruising contact and modern-day showmanship, and part female comradery, innovation, and survival, Roller Babes is the story of an era that now seems fresher than ever. 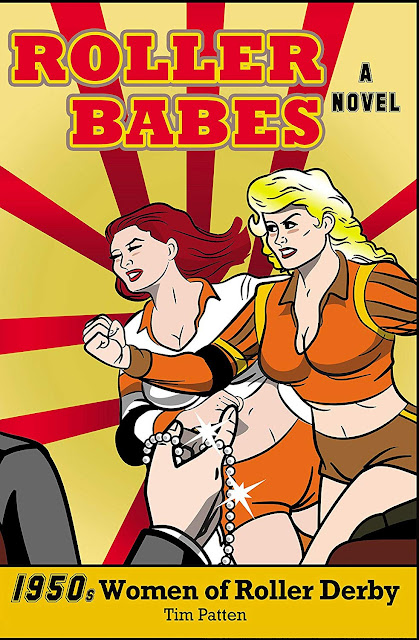 This book is written by a former roller derby participant, Tim Patten. When I read the summary of the book, I felt immediately intrigued and drawn into it. It did not disappoint me. The book is set in the 1950s, where women were pretty much expected to stay home and run the household.

The characters are a delight, strong, powerful, offering important insights into each and every one of the stories. The best part of the book for me was the strong female characters. The author creates a realistic and vivid picture of the sport. This book has an exciting and unique plot along with relatable and interesting characters, and I would absolutely recommend it!
Email Post
Labels: book review indian blogger Lottie Zimmerman Roller babes roller derby sports sports literature tim patten