An Unlikely Chemistry: Autobiography of a Couple by S. Krishnaswamy | Book Review

How can two people survive in a marriage when one of them sees it as an impediment to personal growth?

Well, you keep trying and eventually figure ways of making it work. An Unlikely Chemistry is the story of a couple—a scientist and a filmmaker—who battle personal issues and external challenges and go on to build a life on their own terms.

The scientist, Mohana, stands up to a crippled system, determined to discover an Ayurvedic drug for cancer. On the threshold of global recognition, she is compelled to abandon her research due to the biases of a system plagued by caste-based reservations. 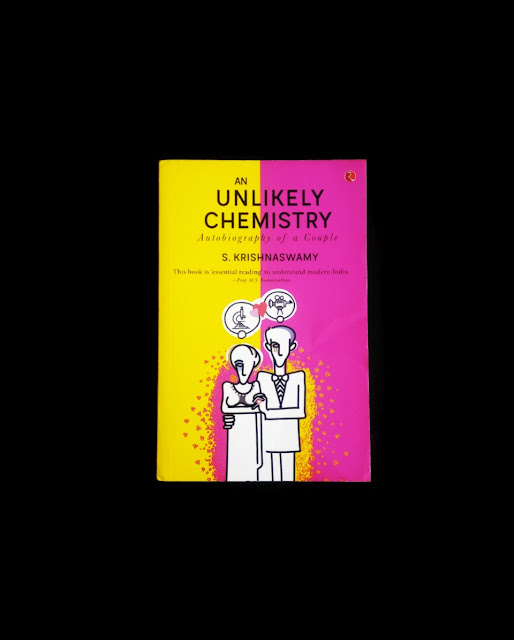 The filmmaker, Krishnaswamy, provoked by a distorted American documentary on India, vows to make an authentic film on Indian history, heritage and culture. A vow he fulfils with the release of his four-hour film, Indus Valley to Indira Gandhi, distributed by Warner Bros.

Krishnaswamy and Mohana then join hands to weave an illustrious tapestry of over two hundred non-fiction films and a dozen television serials. However, their path is littered with politics, controversies, legal battles and societal prejudices, but their belief in righteousness and spirituality helps them overcome these hurdles.

An Unlikely Chemistry is the remarkable autobiography of a couple—their love and their journey of nearly five decades. Within these pages, there’s also the veritable magic and nostalgia of a bygone era.

The cover of the book is very attractive. The title is very catchy as well. The book has been written in first person from Dr Krisnaswamy’s perspective. The author addresses economic, political and social issues which was occurred during those times. The book is about their lives and covers their lives with the usual detail.

The writing had me gripped from the first chapter. The language is lucid and flowy. The author's writing style is also very unique and captivating. I finished the book in three sittings.

The book consists of nine chapters followed by nine annexures and bibliography:
1. Curtain Raiser
2. Before We Met
3.Mother's Choice
4. The Myth on My Film on Indira Gandhi
5. A Non-Political Woman’s Political Biography
6. An Ambivalent Transition
7. Y2K
8. Sojourns in Search
9. If the Angel Returned