A Closetful of Skeletons by Tanushree Podder | Book Review

Five men are on their way to a hill station, where Ramola, a fading movie star, waits for them to make an announcement that will change their lives forever. Ramola withdrew from the public eye at the peak of her stardom. Now, surrounded by retired couples spending their twilight years gardening and gossiping, her life is idyllic. Or at least it was, till the night of her birthday party, when she announces that her tell-all memoir will soon be published. The book, documenting her rise to fame, puts each of her ex-lovers' careers in jeopardy. As each desperate man tries to save himself, Ramola is drawn back into the very web of lies and deception she'd left behind. By the time the party is over, Ramola's neighbour, retired army officer and amateur sleuth, Colonel Arjun H. Acharya, has found his first murder to solve. A Closetful of Skeletons reels you into a cosy world of fresh mountain air, long-drawn bridge games and bloody murder. 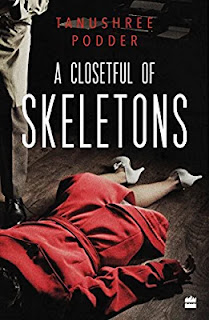 
A Closetful of skeletons is the story about Ramola, a fading movie star who invites her boyfriends from the past to her fortieth birthday party where she announces her autobiography, to the dismay of the guests. The book, documenting her rise to fame, puts each of her ex-lovers' careers in jeopardy.

The language is simple and yet makes you enough impact as and when needed. Most of the characters, in my opinion, were well sketched. I am particularly happy with the author's decision of placing the murder much after the initial character-building of the book has taken place. The interaction between the characters was so natural that I felt I knew them all. Once the pace of the story sets in its difficult to leave the book

I wont go into detail as i dont like giving away possible spoilers. But its a good read and if you into crime thriller i'm sure that you'll enjoy this.
Email Post