Earth to Centauri: The First Journey by Kumar L | Review

Tech for the geek. Thrills for the action seeker. Mysteries for the detective. Science for the uninitiated.

The year is 2095. Voyager 1 launched in 1977 with a golden record - someone has found it and is sending a signal back to Earth. With a newly constructed faster-than-light spaceship named Antariksh, and a crew which includes novices like Lt. Manisha, as well as seasoned professionals, including Commander Ryan, Captain Anara reaches the source of the signal at the nearest star to Earth - Proxima Centauri.

Before she can meet with the aliens, Anara must clear obstacles on her own ship, including a recalcitrant Artificial Intelligence and inexplicable radiation, which threatens the safety of the mission. The implications of what they find on planet Proxima B will resonate far beyond this first journey, exposing Earth to dangers on an unimaginable scale. And then Captain Anara finds out its creators buried a secret aboard Voyager 1. 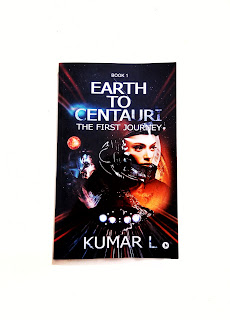 Earth to Centauri is a science fiction book series about a group of astronauts who travel to the Alpha Centauri star system and make first contact with an alien civilization.

The writing is good, the characters very satisfying, and the plot is very well balanced and complete. The action starts right away and the pace remains quick. This novel was incredibly difficult to put down. I decided to read Earth To Centuari because of all the great reviews. I don't believe in being genre specific, so I try my best to read a bit of everything; and I am glad I gave this Sci-Fi a try.

The author has revealed enough things at a time to maintain interest. It's a good mix of excitement and pace of story made this a fun read. This book was intriguing and I'm definitely looking forward to reading the rest of the series.
Email Post