In the near future, the ISI and RAW discover that securing the borders of Pakistan and India is the least of their problems. An extra-terrestrial race of reptiloids prepares to invade Earth — by turning our smartphones into gene-tampering weapons.
Humanity might soon be extinct.
As people in Delhi start turning into alien hybrids, India gears up to face a foe unlike any other.
From unveiling the actual reason behind the Chandrayaan mission to the truth about Osama bin Laden, this explosive geopolitical science-fiction thriller depicts how contemporary India responds to an alien invasion. 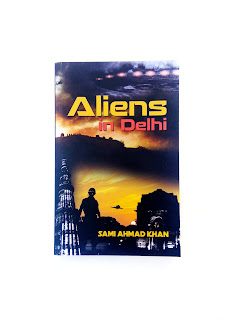 The story gripped me from the first page and did not let go until the very last, with thrills that kept me hooked. The author's writing has a tactile visceral quality that causes you to see what he is seeing and feeling. I would Google terms and phrases and learn so much about them finding out, pleasantly, that the events described actually happened!

It starts out great and - just when you think it can't get any better, it does. It's a good read all the way to the end. It doesn't end like the predictablility would suggest.  It is fast-paced and thoughtful at the same time.
Email Post