The queue was getting shorter, and I too was getting closer to something. It was a big cloud, a hazy one. Everyone was calling this cloud with a name as they were coming closer to it. I wasn't able to hear it clearly from a distance, but as I reached pretty close, I heard the name -God.- Yes, God was what I heard. The small hazy clouds were calling this huge hazy cloud as God. What is this God? I kept thinking as I was moving closer to it.

My turn came, and I was in front of it. The first thing I said to it was God! And to this it replied, -Yes, son.- I was so surprised, frightened, and nervous. I wasn't able to understand the reason for which I called it a god. May be it was some automated command fed into all of us.

Then this god showed me a golden gate just behind it. It was this huge gate, with beautiful carved images on it as if it was telling a story about someone or something. God bent down to its knees and started telling me, or I should say, started giving me a series of instructions. 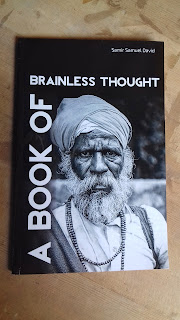 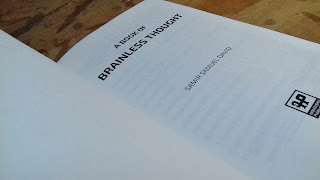 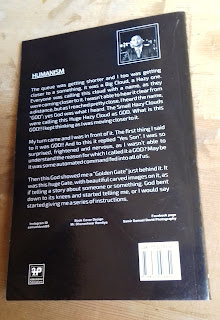 The language of this book simple you won't need a thesaurus.

Each and every chapter of the book is really important, at some point everyone can relate to it. It makes u think about life in a different perspective. It taught me a bunch of things I hadn't known before.

My favorite chapter is 'When Time Speaks' in which author has described very well of time and it's value. And of how one should not give up in the bad times of their life, as it made you grow stronger.

"You own the copyright of your stupidities, which makes sense at times. And it's a lot of better than living a copied life."
Email Post
Labels: A book of Brainless Thought book review Indian author indian blogger inspirational book Samir Samuel David